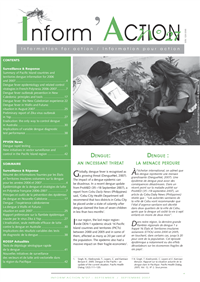 Globally, dengue fever is recognised as a growing threat (DengueNet, 2007). The impact of a dengue epidemic can be disastrous. In a recent dengue update from ProMED (35 – 18 September 2007), a report from Cebu Daily News (Philippines) said, ‘Cebu City Health Department will recommend that two districts in Cebu City be placed under a state of calamity after dengue claimed the lives of seven children in less than two months’.

In our region, the last major region-wide DEN-1 epidemic struck 16 Pacific Island countries and territories (PICTs) between 2000 and 2005 and in some of them, affected as many as 20 per cent of the population. The epidemic also had a massive impact on their fragile economies.

The current dengue fever outbreaks reported in Cook Islands, French Polynesia, American Samoa, Palau and Yap, as well as the circulation of dengue viruses in a few other PICTs (as illustrated in this bulletin), demonstrate that dengue fever remains a threat in the region. It is also a reminder to all PICTs to stay vigilant and ensure they have effective alert and response systems in place to control dengue fever.

It is particularly interesting that the two outbreaks in Cook Islands and French Polynesia are due to DEN-1 virus, despite the fact that this virus has been circulating in the region since 2000 with significant outbreaks in many PICTs, including these two. As an individual can be infected only once by a given dengue serotype, there must still be a population susceptible to DEN-1 in these PICTs. It also demonstrates that no country or territory in the Pacific is immune to dengue, as long as susceptible populations and an appropriate vector are present.

New serotypes can also be introduced to the region by people coming from infected countries. On 27 September 2007, Yap State (Federated States of Micronesia) reported six confirmed DEN-2 cases through PacNet. A few DEN-2 and DEN-4 cases were also reported in Palau at the beginning of the year The DEN-2 serotype has not circulated in the region since 1999.

This issue starts with a summary of the dengue situation in the Pacific region with information gathered for 2006 and up to September 2007. Most of the information comes from PacNet and we wish to thank the PICTs that are sharing their dengue surveillance and outbreak reports on the list. PacNet is definitely a good source of information for following dengue trends and threats for the Pacific Island region, as illustrated in the figure on the brief section pages. Nevertheless, we believe that the information circulated on the network is not exhaustive. We would like to therefore encourage health authorities from all PICTs to post dengue reports on PacNet in a timely manner. This will keep health professionals informed of the current dengue situation over the whole region, and further stimulate appropriate preparedness.

A number of articles describing creative and innovative dengue fever prevention and control strategies from the region are presented in the bulletin. French Polynesia compiled a comprehensive report on the present DEN-1 outbreak, detailing the epidemiological context, control strategies implemented and prospects for improvement.

New Caledonia’s experience is also described, with two articles listing the wide range of measures implemented to prevent a dengue fever outbreak. Their system is sophisticated but effective, calling into play the entire curative and preventive health care chain. They also demonstrate the effectiveness of the thermal imaging camera (64% of imported dengue fever cases were identified at the airport with the camera from 1 April to 13 August 2007) that they acquired after the last DEN-1 epidemic in 2003 and in preparation for an influenza pandemic.

Though Wallis and Futuna has not reported any case of dengue fever since May 2004 (good on them!), they sent us an interesting report featuring a good example of the application of the Population Geographic Information System (PopGIS) to their entomological surveillance system (PopGIS was developed by our colleagues in SPC’s Demography and Statistics Programme.) They also describe the recent initiative of the Health Agency laboratory, which began Ag NS1 identification of the dengue fever virus. More information about this method is given below.

Australia, which suffers regular dengue outbreaks, sent us a comprehensive report on their vector control strategies, which are coupled with sophisticated and aggressive disease surveillance to achieve the goal of eradication.

From the North Pacific, we have a contribution from Yap on the ongoing Zika outbreak there. Zika is a flavivirus that is similar to the dengue virus and is also vectored by Aedes mosquitoes. It could therefore spread to other PICTs that have these vectors. We have reproduced the Zika leaflet compiled by Yap State Department of Health Services, which includes information for clinicians and other health professionals.

In April 2007, a message was posted on PacNet noting the false–positive results for dengue from the PanBio rapid test kits which were observed in Fiji, Samoa and Australia. We asked our colleagues from the Queensland Health Scientific Services (QHSS) laboratory in Australia (L3 LabNet laboratory) to tell us more about their experience with this test. SPC’s laboratory specialist also gives a brief overview of the testing methods available for dengue, including the new products available on the market (Pentax IgG/IgM particle agglutination test and Bio-Rad NS1 antigen strip test) and the test validations that are being conducted on these assays to evaluate their performance.

We present new initiatives developed by PPHSN partners SPC, the Pasteur Institute of New Caledonia and Louis Malardé Institute of French Polynesia to strengthen vector surveillance and control capacity in PICTs. The project will help PICTs not only to respond to dengue outbreaks, but also to prevent them. It will also include a component on developing successful community mobilisation strategies.

Finally, a selection of reference articles and information resources is included at the end of the bulletin. The long list of dengue articles published in Inform’ACTION illustrates the extent of the problems that dengue fever poses in the region.

The idea of dedicating a special issue of Inform’ACTION to dengue arose at the last PPHSN Coordinating Body meeting, held in March this year. It was put together in response to the concern expressed by PICT ministers of health in the Vanuatu Commitment (see text box in the brief section).

The bulletin includes a series of good practices and programmes that have been successful in controlling dengue and that could be applied in other PICTs. Some of the more sophisticated systems described, such as the thermal imaging camera, might be difficult to put in place in many PICTs because of financial and human resource constraints. Nevertheless, interested countries could still apply similar methods by using another less costly device to measure external body temperature.

We sincerely thank the many contributors to this big 27th issue. We hope it will provide food for thought for PPHSN members and that it will generate new initiatives to prevent and control dengue fever in the region.

Since this issue is a ‘special’ one, we thought it was also a good time to make a few cosmetic changes to the layout of Inform’ACTION. We welcome your comments in this regard, as well as on the content – the most important part, of course!