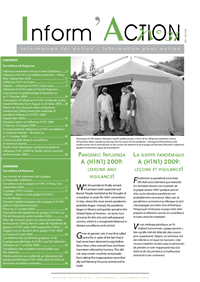 Pandemic Influenza A (H1N1) 2009: lessons and vigilance!
Well, the pandemic finally arrived. It had been both expected and feared. People trembled at the thought of a mutation in avian flu H5N1 somewhere in Asia, where the most recent pandemics probably began. Instead, the pandemic began in Mexico and quickly spread to the United States of America – an ironic turn of events for this rich and well-prepared country, which is a recognised reference in disease surveillance and control.

Given its genetic mix, it was first called ‘swine flu’, in spite of the fact that it had never been detected in pigs before. Since then, a few animals here and there have been infected by humans. This did not stop certain countries and people from taking this inappropriate name literally and blaming this poor animal and its trade.

In the beginning, it was suspected to be a severe form of flu; as with all emerging diseases, serious cases were the first ones noticed. But it seems to be moderate in severity, mitigated by the response activities various countries have prepared over the past few years.

However, it does behave like a pandemic flu in that it eliminates the seasonal flu in its wake, affects younger age groups, hits indigenous people (who are often disadvantaged populations) more severely and sends people who have no risk factors to the hospital or the morgue.

Many countries and territories in our region tried to delay its entry through border controls. They may have succeeded for a few weeks. It’s difficult to say, particularly as the initial case definition used to detect people who were ill often did not cover cases resulting from local transmission. In any event, the region experienced a good-sized outbreak and, unfortunately, several deaths.

Currently, the reported mortality rate in the Pacific region is low (0.002 ‰). The question is whether or not all the cases of death due to the flu have really been reported. Even if only half the deaths from pandemic flu were reported, the mortality rate would still be very low for this first wave. It would be, however, interesting to see the magnitude of deaths not attributed to the flu and to analyse those deaths.

This pandemic has provided us with an opportunity to conduct a real-time test of our preparations over the past few years. Among other things, it has revealed certain weak points, particularly with regard to lab tests — qualitative problems for rapid tests, limits on the number of samples that can be tested by polymerase chain reaction (PCR), and a little bit of both (qualitative and quantitative problems) for immunofluorescence (IFA) — along with the difficulties and costs for certain countries to send samples to reference labs; the state of preparedness of sectors other than health; the communication of appropriate messages to many different population groups in order to motivate them to change certain behaviours; and the state of exhaustion of certain health worker groups due to the workload brought about by the pandemic.

Rapid tests have, in fact, never been great and, in the region, they have always been recommended more for population surveillance activities or for detecting outbreaks, i.e. many people corresponding to the case definition are tested and the chances of getting one or two positive results are greater in the event of infection. But they have never been recommended for trying to confirm rare individual cases — whatever the rapid test might be. This is, however, what was done at the beginning of the pandemic, when countries were free of the disease and wanted to find out if imported symptomatic cases were infected or not.

The quality of samples remains a vital concern. They must be properly taken from the nasopharynx area and then stored correctly if they are not tested immediately. It would seem that the Wallis lab was able to get excellent results with rapid tests by carefully following quality procedures.

There are similar problems with IFA. Although, in general, it is more sensitive than rapid tests, its accuracy also depends on the quality of samples, and it requires solid experience in reading IFA slides and more work time.

Like IFA, PCR – the most sensitive method and the one used as reference – requires a great deal of expertise and time, and the number of samples that can be analysed in one day is limited.

The preparedness and response of sectors other than health varied, especially when we realised that this flu was not that different from the ‘regular’ flu. Response has remained the privilege and burden of the health sector.

Communication efforts used several existing channels, but many populations, particularly those either isolated or having their own specific cultural traits, would undoubtedly have benefited from more precise and better-adapted messages. Unfortunately, it is difficult to say what worked in terms of the various communication exercises and what didn’t.

Whatever the case may be, many people are tired of hearing about this pandemic flu. However, we do not know what the future will bring. It would be a nice surprise to find that this flu completely eliminates other types of seasonal flu or that it becomes milder, or even that it does not develop resistance to neuramidase inhibitors. Unfortunately, several bad-case scenarios are also possible, e.g. an increase in its virulence due to mutation or genetic mixing with, for example, the H5N1 virus, a cause of serious concern for certain flu specialists as it could give rise to a deadly virus; increased resistance to all the antivirals or even a rapid shift in the virus that would make existing vaccines ineffective.

Most of the region’s countries and territories have experienced the first wave of the pandemic, but there are still many people who have not gotten the flu yet and are therefore vulnerable to a second wave in our region.

There are good reasons, then, to analyse the workloads of the various groups of health workers, identify real or potential overload points that require more human resources or a management-level solution and try to ensure better distribution of the tasks involved – both for this pandemic and other epidemics.

Vaccination, which has begun almost everywhere and targets priority groups, is our most effective prevention tool. Even if it may not cover the entire population, it makes it possible to avoid certain problems and, if it reaches its objectives, to limit the pandemic’s impact. If the virus evolves rapidly, this may prove to be less effective and the virus may manage to get around the population’s growing immunity.

In closing: we are not done yet, the pandemic continues and the virus may evolve without it being possible for us to predict when. These are all reasons to be properly prepared and remain alert and ensure that the preparedness plan phases for a serious pandemic are operational in the event they are needed.