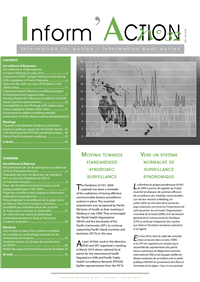 The Pandemic (H1N1) 2009 outbreak has been a reminder of the usefulness of having effective communicable disease surveillance systems in place. This essential requirement was recognised by Pacific Ministers of Health at their meeting in Madang in July 2009. They encouraged the World Health Organization (WHO) and the Secretariat of the Pacific Community (SPC) to continue supporting Pacific Island countries and territories (PICTs) in this area.

As part of their work in this direction, WHO and SPC organised a meeting in March 2010 where national focal points for the International Health Regulations (IHR) and Pacific Public Health Surveillance Network (PPHSN) EpiNet representatives from the PICTs discussed a standard and sustainable syndromic and event-based surveillance system for the Pacific Island region.

Developed by WHO and SPC at the request of Ministers of Health, this system is meant to assist PICTs in complying with IHR requirements. It will shorten the time before outbreaks are detected at the country level, making timely response and control possible.

Members of the PPHSN Coordinating Body (CB) also gave their support to standardisation of surveillance in the region at their 16th meeting, which took place one day before the IHR/PPHSN syndromic surveillance meeting. Summaries of the two meetings are included in this bulletin.

In addition to allowing the early detection of public health problems, surveillance makes it possible to monitoring disease trends and/or outbreaks. Our colleagues from French Polynesia’s Health Department share with us their analysis of a spike in confirmed cases of leptospirosis that occurred during the first quarter of 2010. The data were collected through their leptospirosis surveillance system, which has been in place since 2007.

Rapid and specific laboratory diagnosis plays a major role in the surveillance and containment of communicable diseases. Researchers at the Louis Malardé Institute assessed the performance of three commercial NS1 antigen detection kits during the DEN-4 epidemic that affected French Polynesia in 2009. They share the results with all their PPHSN colleagues in this edition of Inform’ACTION.

The achievements and challenges of the laboratory-based influenza surveillance project for the Pacific Islands, implemented by SPC and PPHSN partners since 2005, are detailed in the surveillance and responses pages. That section also contains a paper aiming to inform agencies and PICTs on key issues related to influenza testing and surveillance systems in PICTs.

Last year, only three PICTs (Niue, Tokelau and Pitcairn Islands) did not record any cases of pandemic H1N1 2009. Niue’s experience is described in the present edition of Inform’ACTION. The previous edition included an article from Tokelau.

The resistance to anti-tuberculosis (TB) drugs, in particular the emergence of multidrug-resistant TB (MDR-TB), has become a major public health problem worldwide, including in the Pacific. A study has been conducted in Kiribati, where TB is highly prevalent, to determine the susceptibility of M. tuberculosis strains isolated to anti-TB drugs and to identify any possible resistance mechanisms. A framework developed by a group of experts to address MDR-TB in the PICTs is also presented in the issue.

Tuberculosis was on the agenda of a workshop for the French Pacific Territories (New Caledonia, French Polynesia and Wallis and Futuna), held at SPC in February 2010, together with four other diseases: dengue fever, influenza, leptospirosis and rheumatic fever. An overview of this workshop is provided in the ‘Meetings’ page.

Finally, the ‘In brief’ section includes information on the PPHSN infection prevention and control guidelines and the 2010 edition of the Directory of PPHSN resources.

Thank you to all those who contributed to this 32nd edition of Inform’ACTION!