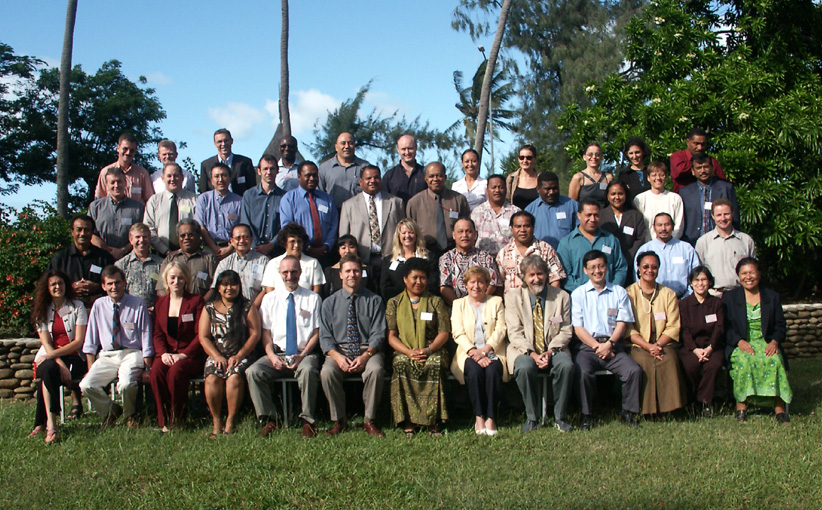 PPHSN Preparedness for Influenza & Other Potential Threats like Dengue & SARS

Co-funded by ADB, SPC (funded by France/NZAid through PREPARE) and WHO

This workshop was co-organised by SPC and WHO under the framework of the PPHSN.
Date: 7-11 June 2004
Venue: Noumea (New Caledonia), SPC Headquarters

Participants
In all, 50 health professionals from all other the Pacific, members of the Pacific Public Health Surveillance Network (PPHSN) participated to this workshop. Since a good coordination and collaboration between the public health and the animal health key players is crucial to maintain the well-being and safety for both human and animal health, SPC and WHO invited specialists from human health and animal health. Laboratory experts participated also to the meeting.

Background Information
The emergence of SARS in early 2003 had prompted the world including the PICTs to further assess the appropriateness and applicability of their responses to emerging and re-emerging communicable diseases. However, in December 2003, avian influenza caused an outbreak in the poultry population of Republic of Korea, and since then had been subsequently confirmed in 7 other Asian countries (Viet Nam, Thailand, Japan, Cambodia, China, Laos, and Indonesia). In January 2004, the health authorities of Viet Nam and Thailand reported their first cases of human infection caused by avian influenza of strain H5N1, with fatalities. Other avian flu outbreaks with influenza A (H7) strains simultaneously occurred in other parts of the world (USA and Canada), and the WHO had confirmed that Influenza A strain H7 in Canada had caused conjunctivitis in human.

The implication of the above can be detrimental if the H5N1, a highly pathogenic avian influenza (HPAI) virus, continues to mutate and possibly gives rise to a novel type of virus with potential to inter-human transmission and therefore starting an Influenza pandemic.

This situation has caused significant concern to PPHSN partners like WHO and SPC, who take pivotal responsibility in scientifically and technically assisting human population to attain good health, as well as working in partnership with animal health key players, to ascertain collaboration in maintaining both the well-being and safety for both human and animal health.

Areas like enhanced surveillance, epidemiology and laboratory capacity need urgent capacity strengthening to better address the threat of influenza pandemic as well as other communicable diseases (CDs) targeted by the PPHSN. Thus, globally, regionally and nationally, we need to develop appropriate tools to be prepared to respond and either avert an Influenza Pandemic from occurring or mitigate its impact.

The current epidemic of dengue fever in Indonesia is of particular concern for the Pacific Island countries and territories (PICTs). Although all four serotypes are present, DEN-3 is the most common serotype circulating. DEN-3 virus importation could mean the beginning of a new epidemic in the Pacific Island region, as this serotype has not been seen for quite a few years[1], and populations not previously infected by a dengue serotype are all susceptible to it.

There is also a need to continue with infection control strengthening so that if SARS or another similar disease (re-)emerges, PICT preparedness level is appropriate, and achievements in this areas are not lost.

ADB, SPC (through funding from France and NZAid) and WHO have agreed to co-fund this regional workshop to address the above and other issues related to PPHSN priority CDs.