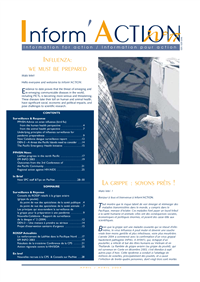 Influenza: we must be prepared

Malo lelei!
Hello everyone and welcome to InformACTION.

Evidence to date proves that the threat of emerging and re-emerging communicable diseases in the world, including PICTs, is becoming more serious and threatening. These diseases take their toll on human and animal health, have significant social, economic and political impacts, and pose challenges to scientific research.

Although influenza may be a common and self-limiting ailment, Influenza A virus can mutate into a much less friendlier strain of virus and become more infectious, even more deadly. The year 2004 began with the confirmation of a highly pathogenic influenza virus (HPAI), A(H5N1), which had jumped from poultry to infect and kill humans in Viet Nam and Thailand. The avian influenza (bird flu) outbreak that started in the Republic of Korea in December 2003 has spread to seven other Asian countries. These outbreaks led to million of birds, mainly chickens, being culled, and also led to 34 human infections, out of which 23 people died in Viet Nam and Thailand. The same strain of HPAI was reported to have caused an avian flu epidemic in Hong Kong in 1997 and confirmed to infect humans with some fatalities. Another strain of influenza A virus, H7, has been confirmed in Canada and has caused conjunctivitis in humans but with no fatal outcome reported so far. Also, the detection of HPAI in wild birds further complicates the efforts to control the current avian flu epidemics and averting or preventing the occurrence of an influenza pandemic.

There is worldwide concern about the implications of avian flu development in parts of Asia where H5N1 caused the most widespread outbreaks in birds ever documented, and jumped from chickens to infect humans in Viet Nam and Thailand with fatalities. These findings indicate a significant increase in the risk of an emergence of an influenza pandemic. Historically, there have been pandemics, referred to as plagues; these include the “Spanish flu” in 1918, “Asian influenza” in 1957, and “Hong Kong influenza” in 1968. The highest fatalities occurred in 1918, reaching about 40 million, particularly among healthy young adults. Although we should continue to remain alert to potential pandemics, updated research findings and preparedness planning should equip us to avert, delay or prevent a pandemic from occurring, and mitigate its impact.

The threat of a DEN-3 confirmed epidemic in Indonesia spreading to PICTs cannot be over emphasised, considering the speed and frequency of people traveling to and from epidemic areas, the length of the incubation period, the presence of vectors, and the current circulation of DEN-1 in the region. It must be realised that while some PICTs are still affected, others may still be recovering from the DEN-1 epidemic (which has been circulating since 2000), and the threat of DEN-3 could cause either a new or a co-existence with DEN-1 epidemic can be devastating. Thus, intensive appropriate interventions including surveillance to control current DEN-1 epidemics in the Pacific, and preventing the introduction of another epidemic (DEN 3), should be enforced.

It is encouraging to see that CDC continues to take active interest in the region by facilitating and supporting initiatives in the six US Affiliated Pacific Island countries such as:

The North Pacific LabNet initiative by broadening its scope of services including confirmatory tests for PPHSN priority diseases and including bioterrorism agents, TB, HIV and STIs, and also assists with funds for infrastructure development and capacity building.

Meetings, workshops and short trainings are effective fora where key individuals from different organisations, institutions, civil societies, and others pick up or improve on relevant skills, plan their activities, identify gaps, funding sources and indicators for evaluation, then report back in the next meeting.

The workshop “Accelerating action against HIV/AIDS in the Pacific” following the second Regional Strategy on HIV/AIDS Reference Group meeting highlighted the intensified efforts of stakeholders and their working partners to pursue the commitment of controlling and preventing STIs including HIV within the limitation of available resources in the PICTs.

The 3rd Conference of the Pacific Community, in November 2003, emphasised the theme 典he Pacific Islands response to Infectious Diseases. The outcome of this biannual SPC meeting with PICT governments and donor partners emphasised the need for high political commitment in the fight to control and prevent infectious diseases; the need for close collaboration between SPC and stakeholders, including donor agencies; the need to develop SPC technical capacity to meet PICT needs; and the integration of services and programmes to maximise outputs.

PPHSN, through its three working arms PacNet, EpiNet and LabNet strives to fulfill its commitment by providing and sharing with you updated information on its eight priority infectious diseases; global, regional and national outbreaks; other emerging and re-emerging infectious diseases; and other related issues. But at the end of the day, we need your support and collaboration to improve PPHSN achievements.