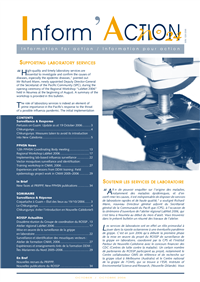 “High-quality and timely laboratory services are essential to investigate and confirm the causes of diseases, especially the epidemic diseases,” pointed out Mr Richard Mann, newly appointed Deputy Director-General of the Secretariat of the Pacific Community (SPC), during the opening ceremony of the Regional Workshop “LabNet 2006” held in Noumea at the beginning of August. A summary of the workshop is provided in this bulletin.

The role of laboratory services is indeed an element of prime importance in the Pacific’s response to the threat of a possible influenza pandemic. The initial implementation of the PPHSN laboratory-based influenza surveillance project, coordinated by SPC and the Pasteur Institute of New Caledonia (IPNC), and funded by the Centers for Disease Control and Prevention (CDC), commenced in June 2006. A number of PPHSN partners, especially the WHO Collaborating Centre for Reference and Research on Influenza in Melbourne (Australia) and the WHO National Influenza Centre at the Institute of Environmental Science and Research (ESR) in New Zealand have taken part in the project. You will find an outline of its progress and a compilation of feedback received from participating laboratory scientists from Cook Islands, Tonga, Palau, Guam and Fiji Islands.

The surveillance and identification of disease vectors, such as the dengue vector mosquito Aedes aegypti, are key elements in the prevention of vector-borne diseases like dengue. A vector mosquitoes surveillance and identification training workshop was conducted in Saipan (CNMI) from 20 August to 1 September. Dengue is a disease to which PPHSN members must pay particular attention. As noted by the PPHSN Coordinating Body (CB) during its 12th meeting, which took place in Noumea at the beginning of July, “The next dengue epidemic might hit the Pacific soon.” A summary of the conclusions and recommendations of the meeting is reproduced in the PPHSN News section.

Development of human resources in health in PICTs is also a major area of concern for PPHSN members, and CB members made a resolution in this regard. On the same issue, Dr Narendra Singh shares the experiences and lessons of the Data for Decision Making (DDM) training courses conducted in Saipan by PPHSN members in the second half of 2005.

The Surveillance & Response pages include an update on pertussis on Guam, based on material from the Guam Epidemiology Newsletter, produced weekly by the Office of Epidemiology and Research, Department of Public Health and Social Services, Government of Guam. We were expecting an article on a recent outbreak of reported pertussis from Papua New Guinea, but the author has not finalised it yet and we hope to publish it in the next issue.

Chikungunya virus is the other topic covered in the Surveillance & Response section, in view of the extent of the 2005–2006 outbreak in the Indian Ocean and the risk of introduction of the virus to our region. We have included a fact sheet on the disease. Dr Martine Noel describes the measures taken to avoid the introduction of the virus into New Caledonia. She concludes her article with a remarkable comment: “Border health control arrangements were tested ‘in real time’, which indirectly improved influenza pandemic preparedness tools and procedures.”

The obvious difference between influenza and mosquito-borne diseases is that with the latter, transmission on an aeroplane is not likely to happen and, in general, the infected person, if viremic, will not further spread the disease if vector control measures are in place in the person’s direct environment. So measures should aim at avoiding contact between the infected person and potential vectors, rather than strict quarantine.

During pandemic phases 4, 5 or 6, if a plane with passengers from affected countries arrives in an unaffected PICT, the best way to prevent the disease from spreading might be to quarantine all the passengers and apply strict infection control measures – or maybe to close the borders to flights from selected areas, depending on the measures taken by other countries and the extent of virus spread.

It is important to note that at present, the available evidence – including results from modelling – shows that entry screening for fever to detect symptomatic passengers with a febrile disease is not the most effective measure to prevent a disease from entering a country,[1] as it will always miss the many cases in the incubation period (or who took an antipyretic treatment), especially if the duration of the flight or trip from the place of infection is short as compared to the incubation period. Additionally, entry screening for fever is resource-consuming and might give a false sense of safety.

Regarding influenza pandemic preparedness, you will find a short introduction to the new staff who have joined the Pacific Regional Influenza Pandemic Preparedness Project (PRIPPP). The next issue of Inform’ACTION will include a progress report on this important project.